Posted on February 22, 2016 by theaugusthail

[Hundred] – The only weapon capable of opposing the mysterious life form, [Savage], that unexpectedly arrived on Earth. Hayato Kirasagi attends Little Garden, a university battleship where students are trained to fight the [Savage], through his high ability aptitude for using the [Hundred].

However once arriving, he is suddenly approached by Emil Crossford, an individual who somehow knows him.

Taken by surprise, Hayato greets his new acquaintance, but he can’t shake an unnerving feeling. To make matters worse, after attending the entrance ceremony, Hayato gets challenged to a duel by the strongest person in the academy, [Queen] Claire Harvey. 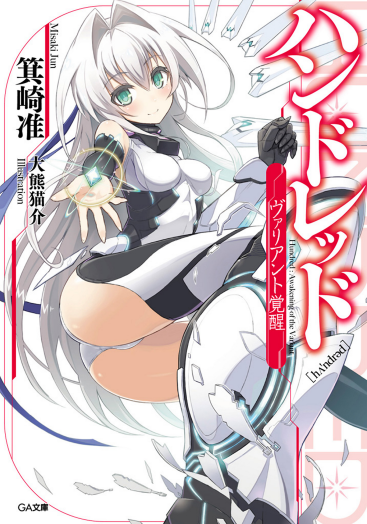 I’m going to take the time to mention that Hundred is another one of those action, comedy, harem, magic high school light novels. If you’re not turned away by the base premise of the story above or the fact that there are a considerable amount of light novels like this, go ahead and read what this particular series has to offer.

The story follows Hayato Kirasagi as he enters the academy due to his high aptitude to use the [Hundred] against the [Savage]. There isn’t much detail on the [Savage] but the main focus is how they have affected our protagonist. He’s there at the academy because his family and his first love were taken away from him by the [Savage] and he has been offered financial and medical support for his sister, his only family member. Hayato’s a protector, not a hero; the light novel mentions his situation and because of this, it gives him the incentive to go forth to use his apparent abilities to get stronger to protect others, in which he couldn’t back then.

While Emil Crossfield often points out how Hayato is more than able to perform well, the main character himself isn’t very confident in his own skills. Hayato’s a bit of a pessimist when it comes his own abilities, even in training. He gets often discouraged due to his inferiority to other students, whether it comes to experience or knowledge. Due to this, he rarely gives himself self-recognition. Luckily, Emil’s character serves to offset his low self-esteem (in probably the cutest ways possible)

Emil spends the most time with Hayato and the two characters fit each other very well. Emil is extremely optimistic and his actions help assure Hayato’s mind. There’s a point in the story where she reassures Hayato and a couple of girls who got involved before his fight with [Queen] and Hayato comments on how his behavior was able to diffuse the gloomy situation. Even when the two start to get romantically involved, their relationship is under control as they consider each other’s circumstances.

The series has a large resemblance to the Infinite Stratos series, most notably the Charlotte Arc (for obvious reasons) and the body suit mechs. The volume has the typical tropes that come with these types of light novels have; boob grabs, jealous love interests, and MC fights against the “most powerful -insert position here-“, etc. These elements aren’t very heavy in content, but they appears in small bits before going back into the story.

The illustrations were drawn by Ookuma Nekosuke and the character designs invoke a feeling in me that this was going to end up being an anime at some point (which it did). The drawings are simple in design but the linework looks very clean. If I had to point out something, but Clair’s breasts in that one color illustrations looks very odd to me. (Probably just me though…) 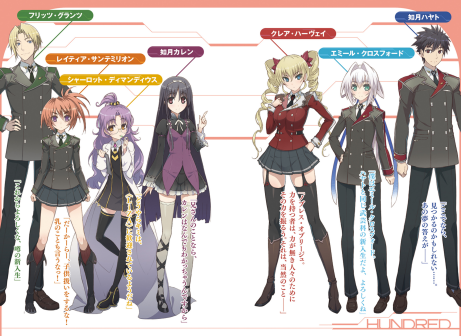 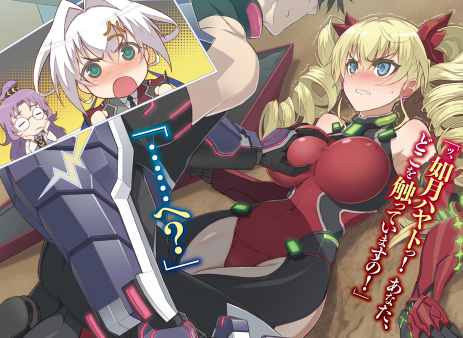 The first volume of Hundred is a nice introduction to the series. It doesn’t do much to offset itself from the others in the genre, having very similar quirks. However, the main focal point for this series is to show off these two fated-to-reunite individuals that compliment each other very well.

The first volume can be found here. However at the time of this post, there is only one volume translated and to my knowledge the translation group’s last update post was in December of 2015.

Afterword: I have a soft spot for magic high school stories like these. I’ve learned not to hate it, but instead embrace the differences that the work offers. Obviously, I understand that others may not think the same way, but I would like for others to understand that it is my personal interest.