Forewarning: The Empty Box and Zeroth Maria has been licensed by Yen Press. Please support the official release once it comes out. The content in this volume will reveal a lot of spoiler related details.

The Shadow of Sin and Punishment-

Daiya Otomine has finally used his box, The Shadow of Sin and Punishment. His goal? To revolutionize the world through “Dog Humans.” The only one who stands in the way of absolute victory is Kazuki Hoshino.

Kazuki will anything in his power to stop Daiya, even if he has to use a box to do so. Through the powers of the “Wish-Crushing Cinema”, Daiya will suffer through four movie screening intended to crush his box and his wish. 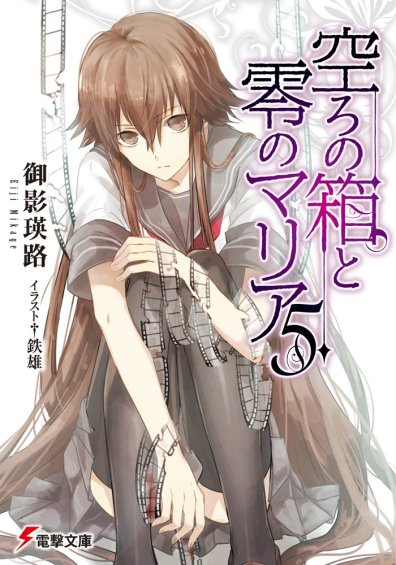 After two volumes of foreshadowing back in the Game of Idleness arc, Daiya has finally used his box to fulfill his wish. This volume features Daiya as a main character in this arc, splitting narratives with Kazuki. Through Daiya’s perspective, we get to see his journey to fulfill his wish as well as the tragic history that accompanies him. From Kazuki’s perspective, we further observe his transformation as he understands his true purpose and obtains the absolute power to accomplish it. 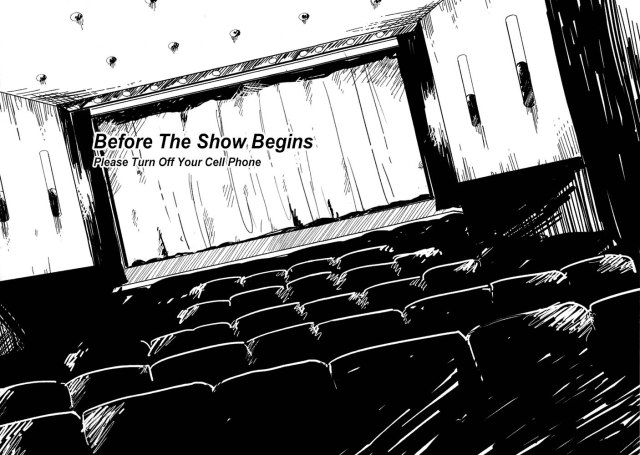 Since the Game of Idleness, we’ve known about the box that Daiya has obtained. All “owners” of a box have a particular wish they want to fulfill, and Daiya is no exception. In his side of the narrative, Daiya conveys his large-scale plan using the box, The Shadow of Sin and Punishment. Like the man himself, it’s a very calculated operation and his beliefs are at the forefront of it all. Unfortunately, his personality and his relationships are practically restraining him from accomplishing his goal, and that struggle is presented during the movie screens of the “Wish Crushing Cinema.” It’s an intriguing case where, aside from Kazuki, the only stopping him is his humanity, and yet the causation for his plan is directly linked that itself. How Daiya suffers through his sins, in addition to the confrontation with the sins collected through his box’s power, is a pleasure to read. 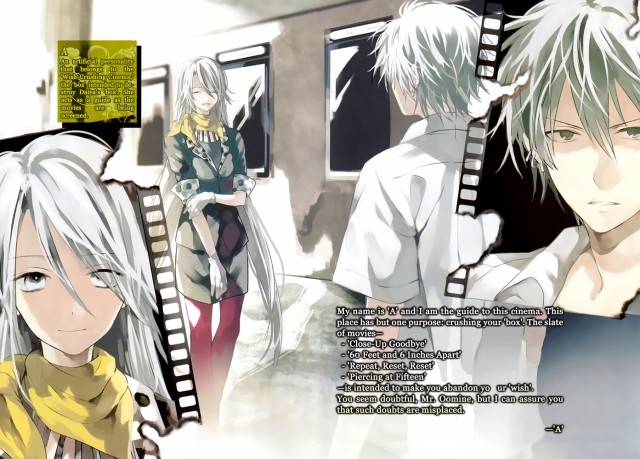 Since the Game of Idleness,  Kazuki has committed to saving Maria from “Aya Otonashi”, the self-sacrificing ideal that Maria wishes to be. And in order to do that, he has to crush Daiya’s box and his wish, even if he has to kill Daiya himself. Kazuki has developed an extremely terrifying dedication, betraying his former “everyday-loving” self. Even others around him have noticed his change, and they become a bit afraid of his demeanor. He has used a box, gotten his friends involved with the boxes, and he’s willing to commit murder. Unfortunately by doing this, Kazuki runs the risk of betraying Maria and destroying their happy relationship. We were foreshadowed to this rising tension back in the Game of Idleness, but with how far Kazuki is willing to go to protect his beloved, it will end up pushing her away from him, or even worse. 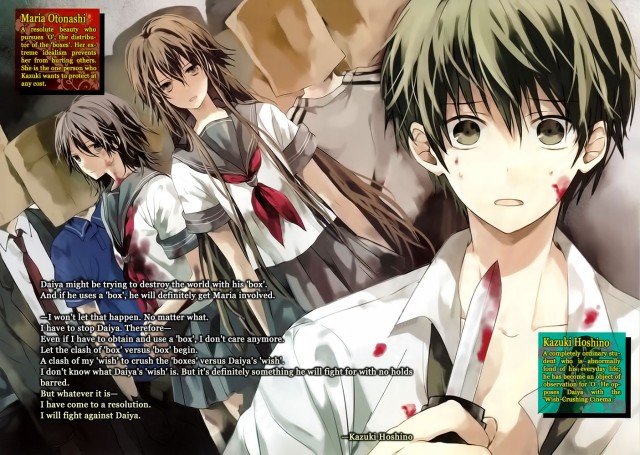 What is crucial to know, is that Daiya , Haruaki, Kokone are childhood friends. Since the first volume, the story drops subtle hints about their relationships with each other. So when the story reveals these key secrets that each character has been holding, it appears shocking. However, HakoMari doesn’t typically use the shock factor to grab your attention; but rather, a melancholy feeling settles in as you read about these three childhood friends. Iroha and Yuuri, while serving important roles, regress to a sorrowful state. I’m a bit conflicted as their characters reached a satisfying conclusion in the last volume, only to fall deeper into despair as a result of Daiya and Kazuki’s actions. And yet, I can’t really fault HakoMari for it because of the boxes’ influence being a core theme of the series.

Why has she done that?

The answer: It was just her suffering and struggle.

That’s how those ‘boxes’ work.

They wreck people so that they can never return to who they were.

As with every volume of HakoMari, there’s always some unique form of storytelling in its writing, ranging from Volume 1’s time iterations to Volume 3’s game round chapters. For this edition of HakoMari, the story uses movie script style writing to present Daiya’s flashbacks, which works with the concept of the “Wish-Crushing Cinema.” It’s an effective method that showcases the viewpoints and thoughts of the main characters in those flashbacks. While we don’t get to see Daiya’s perspective of those particular events, his reactions more than make up for it as it shows Daiya acknowledging his ideals, personality, and regrets. 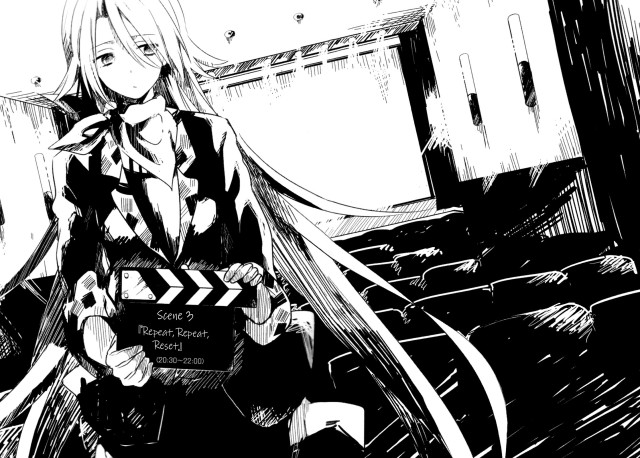 HakoMari has a tendency to be a bit pretentious when it comes to descriptions about their character’s state of mind. This volume takes that detail and amplifies it. It’s most noticeable when Daiya talks about the various effects of The Shadow of Sin and Punishment, but Kazuki’s mental state achieves the same effect.

A numbing pain pierces my innards.

While enduring this pain, I search within my mind for her specific thoughts. The dirty jumble of countless others’ repulsive thoughts that are in my head, makes me want to hold my nose even when there’s no physical stench. I imagine the contents of a witch’s cauldron filled with poisonous plants and lizards.

The pain I feel is most likely a mere illusion: it’s just my heart cringing. My heart is struggling with all its might against touching such filth, and causing me pain as a result. Hell, it’s like a host of tapeworms squirming inside me.

While resisting the waves of disgust, I finally find her thoughts among all the others that I hold in my head. They resemble a “shadow.”

Each of these shadow-like thoughts is someone’s sin.

The illustrations have drastically changed from previous volumes. The depictions of characters are a lot more older and their expressions don’t show a hint of happiness (well… aside from one.) The overall tone of the pictures fit the darker atmosphere of the content, ranging from the dreary color selection to the expressions on the characters. Some of the illustrations (mostly the black and white ones) are based off of the “Wish-Crushing Cinema”, having ‘A’ pose with the clapperboard showing the title of the chapter. Additionally, some pictures uses film rolls as a nice visual effect to the scene. 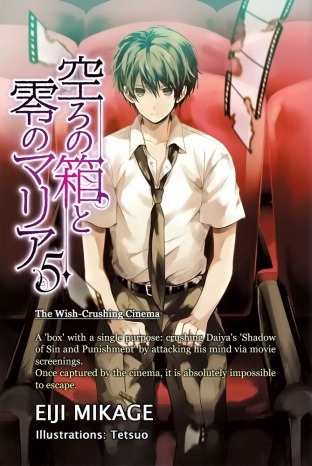 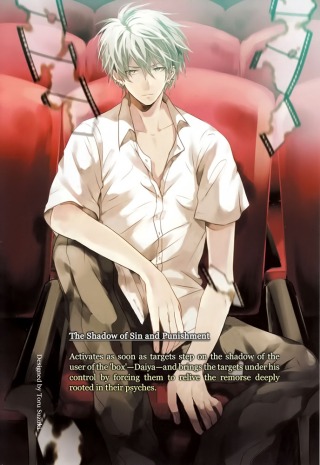 It’s the beginning of end of the HakoMari series, and it features the long-foreshadowed showdown between Kazuki and Daiya. Both sides aren’t backing down, but these attacks are designed to crush each other using their weaknesses. Kazuki’s relationship with Maria has become immensely strained as a result of Kazuki’s almost-psychotic determination and Daiya’s actions. However, Daiya’s wounds from the past are coming back to haunt him as a result of Kazuki’s box. The first half of this arc is a strong start as we see the developments of Kazuki and Daiya, which leads up to a climactic conclusion in the next volume.