Over the past two weeks, my experience having no internet can be compared to drifting endlessly underwater, and then rising to the surface occasionally to take in a breath of fresh air of Twitter and Anime before falling back.

Anyway…I’ll have consistent internet back by the 1st of August, followed by a review. I can’t wait to get back to work. (I’ve fallen so hard in terms of productivity…)

For right now, I have my thoughts on the current airing anime I’ve been watching (in patch note formation), followed by other news I found worth mentioning.

Light Novels and Their Adaptations:

Alderamin on the Sky:

This Art Club Has a Problem!:

Tales of Zestiria the X:

–Persona 3 the Movie #4: Winter of Rebirth: Been replaying Persona 3 again, this time from the girl’s perspective.

–Sword Art Online: Ordinal Scale: Not top priority but it does interest me since it’s an original work by Reki Kawahara. It takes place after Mother’s Rosario if anyone is wondering. Here’s hoping it’s a decently written story

–Tales of Berseria: I’m so hyped for this game. One of the reasons why I want a PS4. Magilou is best girl.

–Persona 5: The other reason why I want a PS4. I love the darker artstyle

–Magical Girl Raising Project: An underground light novel I really want to read. Been keeping my eyes on it for a while now.

–Pokemon Go: Playing it on my down time. Before I went on vacation, I was farming Dratinis.

I’m a High School Boy and a Bestselling Light Novel author, strangled by my female classmate who is my junior and a voice Actress (‘Strangled’) (1+2)

–Translation over at Hellping 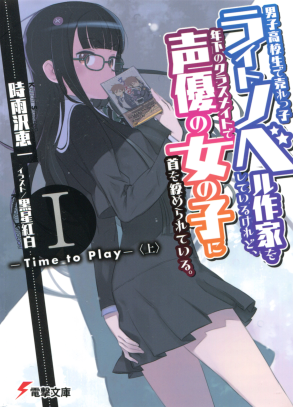