Posted on August 5, 2016 by theaugusthail

I will reference this novel using its abbreviation ‘SukaSuka’

Five hundred and twenty seven years ago, the Emnewytes, released the “Beasts” into the world. Within a year, the race could do nothing to resist against these invaders and the race, also known as humans, became extinct. The beasts continued to wreak havoc on the world, destroying the other species as well. In order to live, the remaining races escaped to where the beasts could not reach them. The sky…

Willem needs money to pay off his debt. His friend offers him a job to manage weapons for the army. Willem accepts the job but upon arrival, he is greeted by many young children. Confused by his current situation, he asks the oldest girl if there was a misunderstanding, only to receive a dark response in return.

“We are the weapons you’re talking about.” 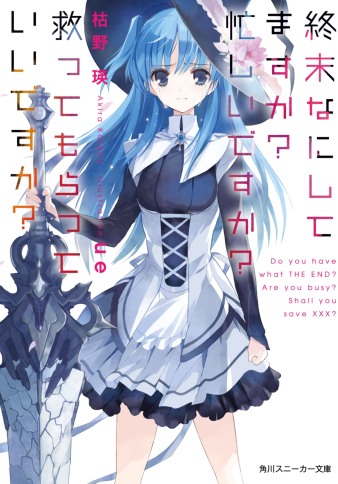 Reading SukaSuka can be compared to a old war veteran telling his grandchildren about his stories on the battlefield. Overall, the volume is sad and gloomy when taking in the characters’ unfortunate situations. Despite this, the relationships between the main character and the cast remedy these emotions through some lighthearted scenes…before hitting you with more tragic details as the story develops.

Willem is a ‘Markless’, a collection of races with no scales, horns, or tails. In this fantasy world, many races and species escaped to the sky to avoid the ‘Beasts’, the dangerous creatures that the humans released into the world. Anyone who sees a ‘Markless’ is reminded of the unforgettable actions of those humans and is treated with disgust.

This is just a small part of the world setting of SukaSuka. The volume makes use of its settings to establish the history and backstories of characters. These can range from the disapproval of some races like I mentioned above to certain personality quirks of the different characters. ‘SukaSuka‘ does a fantastic job balancing the setting with the characters. It doesn’t focus too much on the description of the world but it leaves enough details to convey key points in the plot.

Willem accepts his job as the manager of the weapons but realistically, he acts as the babysitter for all of the girls. As the light novel progresses, the atmosphere between the Willem and the girls warms up. These light-hearted moments are designed to create attachment, having some nice heartfelt scenes between each party. The novel conveys these interactions well and when combined with the author’s carefully crafted structure of some scenes, it slowly creates a morose feeling that leaves a definite impression.

“I once had someone like a big sister too. I took this brooch from them.”

“It was one of her treasures. She always wore it and took good care of it, so whenever I asked for it she wouldn’t listen.”

“I would challenge her to various games, demanding the brooch if I won. Like grades in our training courses, or eating contests, or card games. But I never won. Even so, I kept challenging her because it was fun.”

The ‘big sister’ patted her back and went on. “Well in the end, I won by default. One day, she went off to battle without her brooch on. She had just left it on the desk in her room, so it became mine.” She laughed, even though Kutori couldn’t see anything funny about her story. “I think it looks bad on me too… but I feel like I need to wear it.”

Again, Kutori never liked her very much. But, looking back, maybe she wasn’t so bad after all. So that day when she never returned home from battle, Kutori went to her room. Behind the unlocked door lay a mess of underwear, card games, and other miscellaneous items strewn about. Amidst the clutter, only the top of her desk was clean.

A silver brooch sat all alone right in the middle.

While Willem interacts with the young girls, the story also doesn’t forget to give the guy some development. His background is referenced through his present experiences, in a deja-vu like manner. For example, his recipe to cook cake for the kids call back his own experiences of having that very same cake served to him. It’s an effective method to integrate the two time periods together, and yet it also feels absolutely devastating when you read it.

Our main heroine for this volume is Kutori Nota Seniolis and her development can be taken as a generalization for her species and her “sisters”. For a fifteen year old girl to be sent to the battlefield, there is lot going through her mind. Love is a primary concern here, not between two characters, but as a concept. The novel covers her pure emotions and motivations and Willem’s influence helps Kutori vent out her problems. By the end, we don’t have a conclusive ending to what happens to Kutori later on. As a reader, it’s immensenly frustrating, but thematically it works.

The illustrations are drawn by ue whose only work is this series and its sequel, SukaMoka. I really like ue’s cute depiction of the characters. It’s not fully chibilike but the designs are very adorable, especially with kids. Most of the illustration focus on the cast of characters, with soft line work and attractive color selections. I also do want to point out that the cover picture of Kutori crying does a good job to attract attention.

SukaSuka’s first volume does a fantastic job introducing the fantasy world and its detailed characters. The pace is steady and the story is structured to make the most out of the characters’ interactions, ranging from heartfelt moments to reflective conversations. With a well-grounded foundation followed by open ended plot elements and ending, ‘SukaSuka‘ sets itself up for future volumes, and I’m very curious to see where it goes.

The first volume of ‘SukaSuka’ can be found here at fgiLaNtranslations.