Forewarning: Magical Girl Raising Project has been licensed by Yen Press. Please support the official release once it comes out.

The Puk Faction have almost gathered all of the necessary preparations in order to activate the powerful device that First Mage left behind. With time running short, the various Magical Girls make an alliance in order to take down Puk Puck. While stopping the activation of the Device is their shared goal, that objective is second to their own personal agendas. So between the Puk Faction, the Osk Faction, and Pfle’s mercenaries, who comes out on top of this large Land of Magic political conflict?

QUEENS is the third and last book in this trilogy of the Three Sages arc. All of the power players have gathered in this culmination of Puk Puck’s large scale plan, each with significant impact on the Land of Magic. For what is the climax of this arc, the story involving the Three Sages conclude. But in regards to the surviving characters involved, some of their resolutions at the end are mostly underwhelming.

For the cast of QUEENS, the surviving Magical Girls from ACES remain. However, two Magical Girls are introduced in the plot of QUEENS: Mana, a returning Mage from the Limited arc, and Lethe, the new leader of the Osk Faction. 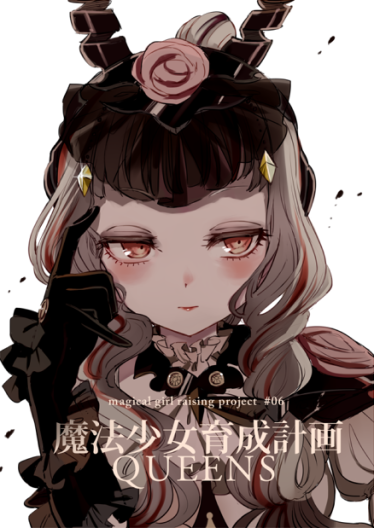 QUEENS immediately follows ACES with the first half of the novel in a setup stage. Factions are defined, alliances are formed, and teams are assembled. The second half of the novel is where the majority of the action takes place. For this volume, the events taking place can be described like an attack/defend military scenario. The Puk Faction consists of none other than Puk Puck herself, Shadow Gale, and Snow White. Meanwhile, the opposing side contains the rest of the cast. The reason I say “opposing side” rather than faction is that while they have a common goal, each person has their agenda for being there, whether its stopping Puk Puck or capturing Shadow Gale. We do get some interesting interactions ranging from comical to thought-provoking between some of the duos like Pfle and Mana, and Dark Cutie and Princess Deluge.

Puk Puck get more involved in the narrative in QUEENS rather than her behind-the-scenes portions in ACES and her actions gives us more information about Puk Puck herself and her role as the leader for the Puk Faction. Back in ACES, Puk Puck’s attitude towards those close to her were an enigma. She could have been indifferent towards her subordinates for the sake of her plan or it could been that her feelings for them were truly real. All of this is made immensely complicated with her magical power to befriend anyone, questioning whether or not the power was only slightly influencing them or just outright brainwashing them. There’s also the opposing side painting Puk Puck’s leadership and her ability in a dark light with the depictions of her servants being abnormally loyal to Puk Puck. Additionally, Uluru’s change in heart between ACES and QUEENS continued to make it even more apparent. In the end, Puk Puck’s genuine feelings towards her subordinates are left open ended to the reader, leaving us to wonder if those emotions and feelings were mutual.

Pfle also takes the initiative in regards to leadership. Her goal have not changed since the last volume, unwavering from her goal of saving Shadow Gale. Now that Shadow Gale has fallen in the hands of the Puk Faction, it’s up to Pfle to gather every possible resource at her disposal in order to save her. Pfle’s conviction doubles as both a continued retrospective at her manipulative and perceiving nature without Shadow Gale by her side, as well as revealing the truth behind the Man-Made Magical Girls to Princess Deluge. Her inner thoughts and actions thus far have lead her to become the most compelling player worth following in QUEENS. 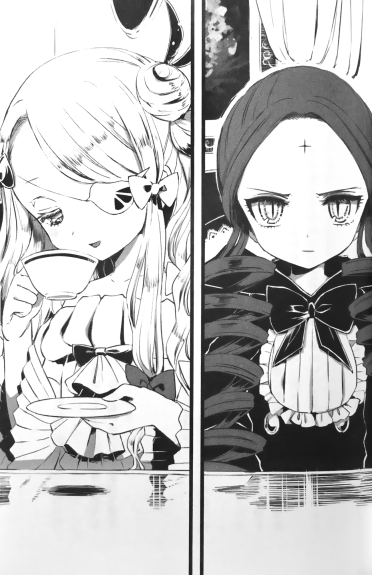 Aside from these two key Magical Girls, other characters serve supporting roles in either  moving the story along or providing information and details on less developed characters like Uluru and Princess Deluge. Lethe and CQ Angel Hamuel moves the story along, offering small talk on Lethe’s arise to power. Dark Cutie and Blue Bell Candy, in conjunction with Pfle, supports Princess Deluge’s growth. And finally, Uluru’s newly established dedication to justice is assisted by Snow White and Mana. Despite the growth in these significant characters, their resolutions gets jam-packed into an extended epilogue, embodying a hollow feeling.

Maruino continues to impress with the character illustrations. Marino emphasizes the linework in the details of these character profiles, almost giving a regal impression in some  of the characters. QUEENS by itself can’t function as a standalone volume, but rather it marks the end of this arc. And yet, despite being the climax of this three volume arc, the story doesn’t feel conclusive at all. While certain characters get amble development throughout this arc and this volume, their future is left open ended and ambiguous. However, the end of this arc marks a crucial portion in the whole plot of Magical Girl Raising Project, as the repercussions will heavily impact the Land of Magic and its inhabitants.