Posted on August 3, 2016 by theaugusthail

Through his uncle, Ao was given a job as a manuscript screener for a light novel newcomer competition. Upon reading hundreds of submitted manuscripts, he comes across a work written by his classmate, Hiyuki Hyonomiya.

The girl known as the Ice Maiden submitted a light novel with varying font sizes, lots of onomatopoeic words, and expressive emoticons. Her work was heavily criticized by other screeners but Ao sees the potential in the world environment, character settings, and story structure.

Ao approaches Hiyuki to talk to her about light novels and her manuscripts but soon after meeting each other, Hiyuki asks for Ao’s advice.

“Just once, I want to make it through the first stage of screening…”

“Please, teach me how to write a novel.”

Manuscript Screening Boy and Manuscript Submitting Girl: Watched over by the gentle sky, the story of the bashful ocean or as I will call it ‘Manuscript‘, is short but youthful romance tale about two high school students and their unique relationship due to light novels. While the novel does explain a small bit on the screening process for entry light novels, the main focus in this aspect is the emotions and reactions to reading and creating those innovative and imaginative works. It’s the weakest and most predictable of Mizuki Nomura’s romance works but it’s definitely the happiest.

Once Hiyuki asks Ao for help getting her manuscript through the first round of screening, the two go to a cafe to plan out Hiyuki’s new manuscript. Most of the scenes and events are completely fundamental and can be easily compared to any romance story out there. Guy finds secret about girl, girl wants to keep it a secret, the two go on adventures with each other, girl misunderstands the guy’s situation, and the guy chases after the girl. Paired it up with some melodrama and you have a predictable teenage love story. 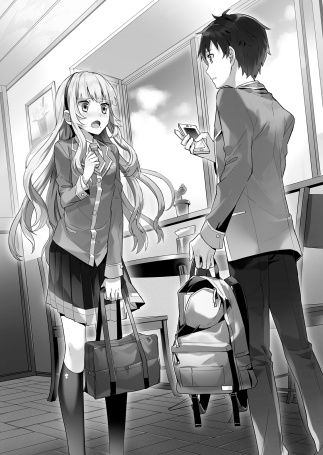 To mix things up a bit, Nomura themes the story off of light novels. To be more specific, the creative process and the emotions behind making a light novel is integrated into the romance portion. The novel covers a bit of the manuscript screening process, showing how entries to light novel contests are moved through three screenings. Ao relays all of this information through his perspective, reacting to all the various light novel stories. The novel doesn’t spend too much time discussing the industry compared to ‘Strangled‘, but it ties in some personal experiences from Nomura to make the content informative and insightful.

Our main characters are two people who are inexperienced when it comes to love and the way their relationship builds up resembles typical shoujo plotlines. Ao has a friendly personality and is genuinely nice to everyone, including his criticism to authors. On the other hand, Hiyuki Hyonomiya is the ‘silent but cool’ type, unapproachable by other students. As they come together to work on Hiyuki’s manuscript, their bond grows with each event. While I can say that ‘Manuscript’ is a pure romance between the two teenagers, I can’t dismiss their immense love for light novels.

Right off the bat, Ao expresses his love for reading and the different manuscripts he examines. From titles like After Dying and Going to Hell, Five Brides are Waiting for me to The Lamb-Like Girl, he reads them with profound interest, positively commenting on them. Ao also shares his love along with Hiyuki and he shows it through his advice. 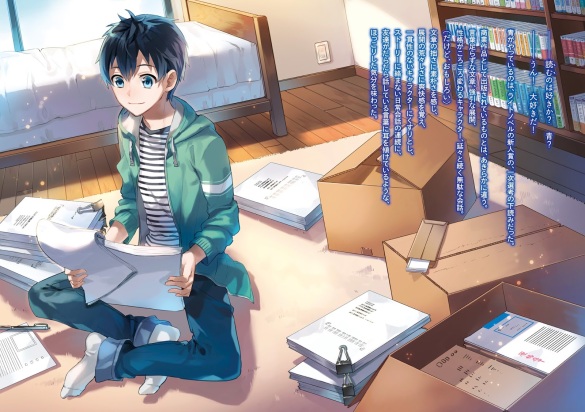 Hiyuki is definitely an author that puts herself in her writing. Her writing shows her passion and effort into creating something she hopes everyone will enjoy. Of course, this is reflective on herself as an individual and Manuscript does explore that route. I found Hiyuki very charming as a character and I enjoyed her development as the story continued.

The illustrations are drawn by Eihi who has previously done illustrations for Kyou, Tonari ni wa Kimi ga Inai and Bokura wa Mahou Shoujo no Naka. Eihi’s pictures fit ‘Manuscript’s atmosphere; Soft character designs, vibrant color selections, bright scene lighting, and pretty backgrounds. Personally, I love the multiple shades of blue and cyan in every color picture, either serving a primary color for the background or as a highlight for a character’s hair. 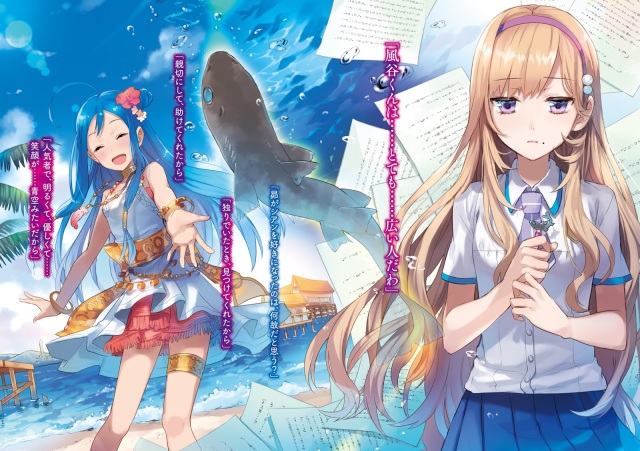 Manuscript is a youthful romance story like others in the genre but with a light novel theme integrated. While not the strongest love tale out there, especially for Nomura’s other works, the novel excels in displaying the characters’ love for their beloved light novels in a very sincere and earnest way.

The translated volume can be found here at Skythewood Translations.